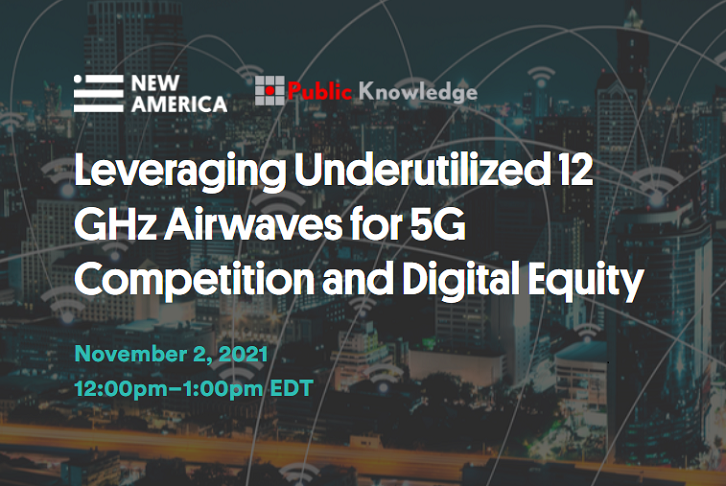 As demand for wireless broadband connectivity continues to surge and Congress prepares to adopt a bipartisan infrastructure package aimed at closing the digital divide, policymakers must expand access to the nation’s invisible infrastructure: the public airwaves.

The Federal Communications Commission (FCC) is currently considering proposals to expand access to the underutilized 12 GHz band. This band represents an unprecedented 500 megahertz of spectrum with enormous capacity for high-speed 5G-quality wireless connectivity.

Opening the 12 GHz band to wireless 5G and unlicensed opportunistic spectrum sharing is premised on studies that show coexistence is feasible with the two satellite services that currently share the 12 GHz band. By opening the band, the FCC can improve broadband coverage and capacity for millions of unserved and underserved Americans who for too long have been on the wrong side of the digital divide.

A coalition of industry stakeholders and public interest groups have come together to promote the potential benefits of expanding access to the 12 GHz band, such as facilitating the deployment of 5G wireless services, promoting competition, enhancing the benefits of next generation Wi-Fi, and narrowing the digital divide in underserved communities.

Join the Wireless Future Project and Public Knowledge for a panel that brings together a diverse set of perspectives to discuss the potential uses and benefits of expanding access to this 500 megahertz of spectrum.